In­flammation is a complex process involving multiple actions/reactions and a wide variety of Biological substances. In­flammation is triggered by the body’s immunological response to tissue damage. Unlike prescription and many over the counter drugs typically used to treat chronic inflammation, Boswellia Rx™ specifically targets the 5-lipoxygenase (5-LOX) pathway. As such, Boswellia Rx™ is able to reduce inflammation without the side effects commonly associated with NSAIDs and which are often worse than the symptoms they promise to relieve.

In­flammatory signaling molecules known as leukotrienes trigger in­flammation in the human body. Overproduction of these molecules may result in chronic in­flammatory conditions. The 5-lipoxygenase (5-LOX) pathway is the major source of proin­flammatory leukotrienes. 5-LOX breaks down arachidonic acid to pro-infl­ammatory compounds like leukotriene, a molecule that attacks joints, arterial walls, and other tissues. 5-LOX itself facilitates undesirable cell division changes.

While Boswellic acids inhibit leukotriene synthesis via 5-LOX inhibition, there is no effect on COX activities. This explains why, unlike NSAIDs, Boswellia Rx™ has no undesirable side effects. Boswellia Rx™ has also been shown to shrink infl­amed tissue by improving blood ­flow to the affected area as well as enhancing the repair of blood vessels damaged by in­flammation.

Long term use of NSAIDs may lead to more serious side effects such as ulcers, bleeding, kidney failure, and liver failure. NSAIDs inhibit the enzyme COX-2 to prevent in­flammation; however they also block the enzyme COX-1, which is needed to maintain a healthy stomach lining. This is just one of the causes of NSAID toxicity, contributing to the development of ulcers and kidney problems. These side effects are considered so serious that the FDA now requires a warning to be placed on NSAIDs and COX inhibitors.

The Boswellia Serrata plant is native to the dry habitats of India, Northern Africa, and the Middle East. The gummy resin of this tree, also known as frankincense, contains compounds which have been used for their anti-inflammatory and pain relieving effects for thousands of years.

New research into the Boswellia resin has shown that Boswellic acids are powerful inhibitors of pro-inflammatory molecules, and may prove to be more effective than NSAIDs. Specifically, the acid 3-O-acetyl-11-keto-beta-boswellic acid (AKBA) has been identified for its ability to inhibit the enzyme 5-LOX, intervening at the cellular level to block its unwanted effects. Inhibiting this enzyme restricts synthesis of inflammatory signaling leukotrienes.

Suppresses inflammation of the joints

No side effects, non-addictive

Safe for long term use 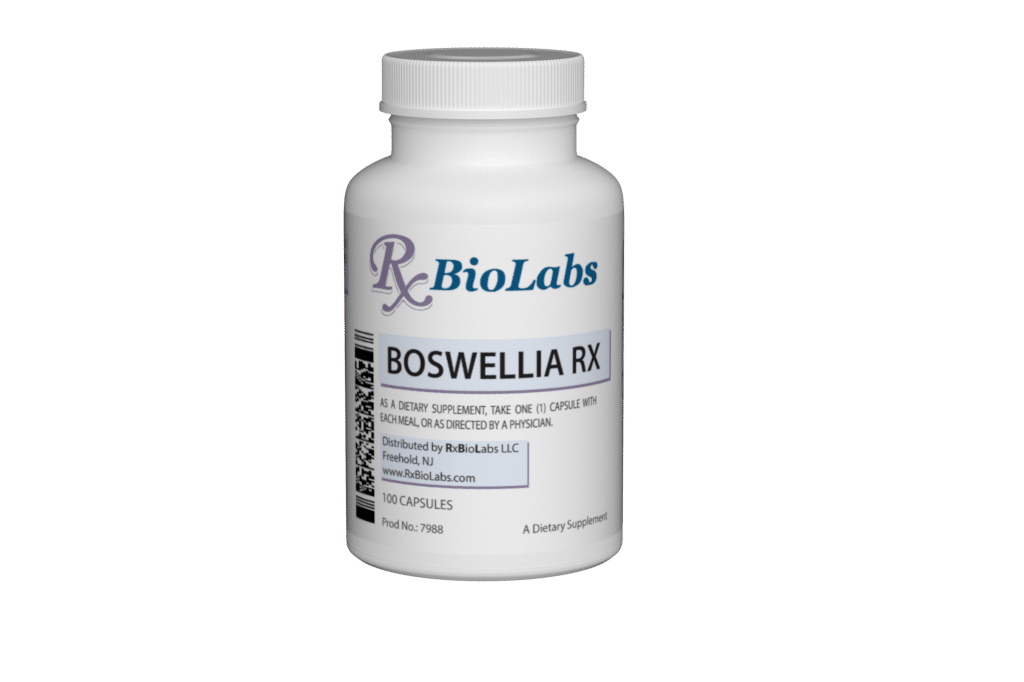 How to use Boswellia Rx ™:

3-4 capsules per day. A loading dose of 6-8 capsules is recommended for the first two weeks.

These statements have not been evaluated by the Food and Drug Administration. This product is not intended to diagnose, treat, cure, or prevent any disease.