Chromium HCA ™ is a combination of key ingredients that studies have shown to be beneficial in aiding weight reduction.* RxBioLabs uses the same formulas and strengths as the name brand Doctor prescribed Weight Loss Pills but delivered DTYD (Direct to Your Door), you do not need a prescription

HCA, or (-) hydroxycitric acid is an organic compound obtained from the dried rind of the Brindall berry fruit of the plant, Garcinia Cambogia, which is native to India. This chemically unique compound has been studied extensively for its effects on appetite regulation, carbohydrate metabolism, and total body lipids. It inhibits the body from turning carbohydrate calories into fat and assists in reducing fat and cholesterol production.

Chromium Polynicotinate is a form of chromium that is easily absorbed and retained in the body. The use of biologically active chromium as a nutritional adjunct in weight control is based on its ability to overcome insulin resistance and / or enhance the effects of insulin.” Insulin is a potent hormone involved in protein, fat and carbohydrate metabolism. As a bonus, in addition to curbing sugar and carbohydrate cravings, turning up “fat burners” and inhibiting loss of lean muscle mass, it also lowers cholesterol.*

Bioperine® is the purified alkaloid extract from black pepper and was developed specifically to address the problem of Nutrient availability.* The metabolic process that generates energy at the cellular level in our body is called thermogenesis. While thermogenesis has typically been categorized as a key factor in weight loss, to confine its scope of its function to this aspect alone is incomplete.  Theremogenesis plays an integral role in our body’s ability to properly utilize the daily foods and nutrients we consume. It sets in motion the mechanism that leads to digestion and subsequent gastrointestinal absorption.

Bioperine® enhances the body’s natural thermogenesis activity – hence the term Thermonutrient™. This enhancement may be explained as a means of increasing thermal energy sufficient to “power up” mechanisms related to thermogenesis. This in turn, results in increased metabolic processes that create “demand” for “supply” of a broad range of nutrients that contribute to metabolism, (i.e. vitamins, minerals, herbals, amino acids, etc.). It is as though Bioperine activates a metabolic paddle wheel, of sorts, that selectively provides a more efficient mode of nutrient transportation into the blood.* Based on available research, Bioperine is unique in its thermonutrient activity.*

Specific Function of Chromium HCA ™ as a Weight Loss Aid:

Scientists believe that (-) Hydroxycitric acid blocks fatty acid synthesis from glucose by inhibiting ATP citrate lyase, the enzyme in hepatocytes (liver cells) that cleaves citrate.* Simply stated, from the food that is eaten, carbohydrates are broken down into glucose molecules, the blood sugar that the body uses for energy. If these glucose molecules are not used immediately, they are stored into glycogen or converted into fat with the help of the ATP citrate lyase enzyme. HCA, however, can temporarily inhibit this enzyme by decreasing fat synthesis and by causing changes in the liver that would favor fat burning and glycogen storage.* HCA’s effect as an appetite suppressant is due to the increased production of glycogen accompanied by the enhancement of glucose receptors in the liver.* This leads to feelings of satiety via messages sent to the brain through the vagus nerve.* In two preliminary human studies, HCA was shown to work even better when chromium was added.*

The benefits of Chromium HCA™ – with a proper diet (such as our Clean Healthy Prepared Meals) or equivalent and a regular exercise program: 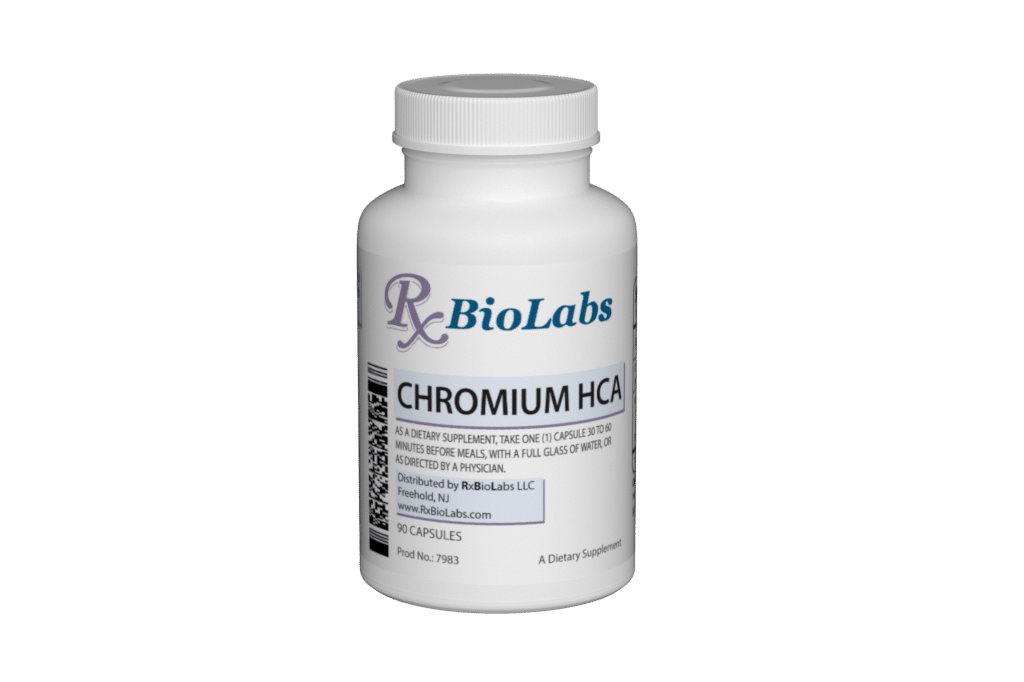 RxBioLabs uses the same formulas and strengths as the name brand Doctor prescribed Weight Loss Pills but delivered DTYD (Direct to Your Door), you do not need a prescription! Click Here to buy Chromium HCA™ online!

*These statements have not been evaluated by the Food and Drug Administration. This product is not intended to diagnose, treat, cure, or prevent any disease.